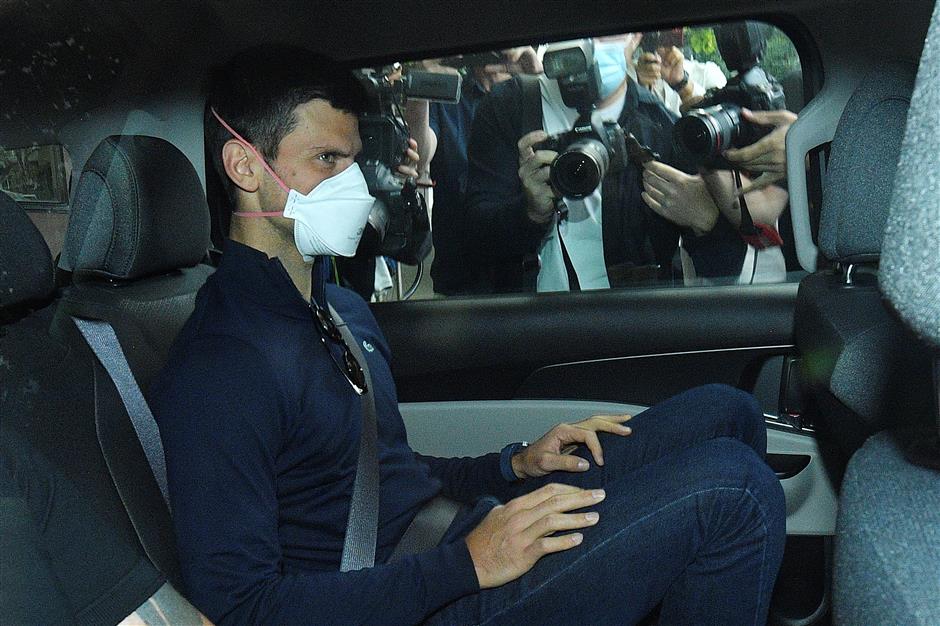 World Tennis No. 1, Serbian Novak Djokovic, leaving a government detention facility to attend a court hearing in Melbourne on Sunday.。

Novak Djokovic was set to be deported from Australia after a court on Sunday dismissed his appeal against the government's cancellation of his Australian visa on the grounds that his decision not to be vaccinated posed a risk to the country.。

Djokovic had appealed Immigration Minister Alex Hawke's use of discretionary powers to cancel his visa on the grounds that he was a threat to public order because his presence would encourage anti-vaccination sentiment amidst Australia's worst outbreak of the virus.。

Chief Justice James Allsop said the Federal Court ruling was based on the lawfulness and legality of the minister's decision in the context of the three grounds of appeal Djokovic's team lodged.。

"It is no part of the function of the court to decide upon the merits or wisdom of the decision," Allsop said, adding the decision was unanimous among the three judges. Full reasoning behind the decision would be released in coming days, he said.。

It was not immediately clear when the government would seek to remove Djokovic.。

The verdict brings to a climax a rollercoaster 10 days during the world's top tennis player was detained by immigration authorities, released and then detained again ahead of a tournament that starts on Monday.。

The Serbian champion was escorted to his lawyers office by immigration officials to attend the virtual court hearing on Sunday morning, having spent Saturday night back in an immigration detention hotel.。

Djokovic had been granted a visa to enter Australia, with a COVID-19 infection on December 16 providing the basis a medical exemption from Australia's vaccination requirements to play in the Open. The exemption was organised through Tennis Australia.。

That exemption prompted widespread anger in Australia, which has undergone some the world's toughest COVID-19 lockdowns and where more than 90% of adults are vaccinated, and the government said recent infection alone did not meet its standards for an exemption.。

Dominating headlines globally for more than a week, the Djokovic visa saga has fuelled the fierce debate over the rights of those who opt to remain unvaccinated as governments take stronger measures to protect their people from the pandemic.。

More than two years into the COVID-19 pandemic, the global infections and deaths have waxed and waned in different parts of the world.

As the Omicron variant of the coronavirus appeared more contagious and less lethal, several Western countries, where cases have been falling in recent weeks, decided to lift their restrictions.

In its latest report issued on Tuesday, the World Health Organization said the number of new weekly COVID-19 cases increased by 8 percent last week, as compared to the week prior to it, after "a consistent decrease" in the caseload since the end of January.

"The number of new deaths continued a decreasing trend," globally down by 17 percent last week as compared to the week from February 28 to March 6, the WHO added.

In the United States, the worst-hit country with the highest caseload and the most deaths in the world, President Joe Biden called on Americans to return to the office and "fill our great downtowns again" in his State of the Union Address earlier this month.

The United States has recorded around 79 million cases and over 960,000 deaths, while daily cases continue to drop, according to the US Centers for Disease Control and Prevention.

"We currently have about 35,000 cases in this country. We expect some fluctuation, especially at this relatively low level, and, certainly, that to increase," White House Press Secretary Jen Psaki said at a press briefing on Monday.

Across the Atlantic, the British government said Monday that all remaining COVID-19 international travel restrictions will end Friday to make going on holiday easier for the Easter school vacation.

Transport Secretary Grant Shapps said the changes will mean people "can travel just like in the good old days."

Britain recorded an average of 73,310 cases per day last week, according to COVID-19 statistics from The New York Times. The country's caseload has increased by 77 percent from the average two weeks ago, while deaths have fallen by 10 percent.

France also lifted most coronavirus bans on Monday, ending the need to wear masks in schools, offices and shops, and allowing the unvaccinated back into bars, restaurants and cinemas.

Official data showed COVID-19 cases in France have increased by 23 percent from the average two weeks ago, while deaths have decreased by 37 percent.

On Tuesday, Dutch Health Minister Ernst Kuiper announced that the government would further scale down COVID-19 rules from next Wednesday. The mask obligation in public transport will disappear, and a negative test is no longer required at events with more than 500 participants.

In Oceania, daily COVID-19 cases have been falling in Australia, but still rising in New Zealand.

Australia said on Tuesday that it is about to ease its entry ban for international cruise ships next month, bringing an end to all major COVID-19 travel bans. Last month, Australia reopened its airports to vaccinated international travellers.

New Zealand Prime Minister Jacinda Ardern said Wednesday that the country was "ready to welcome the world back" as the nation continued to ease its coronavirus restrictions.

"Closing our border was one of the first actions we took to stop COVID-19 two years ago. It did the job we needed. But now that we're highly vaccinated and predicted to be off our Omicron peak, it's now safe to open up," she said.

Haaland is no option to replace Lewandowski, says Rummenigge******

BERLIN, Nov. 1 (Xinhua) -- Robert Lewandowski's most spectacular goal might have been overlooked by a majority of the public.。

No TV camera covered the Pole's stunning shot fired off on the training pitch hitting an unusual target such as the office window of Hasan Salihamidzic. Bayern sporting director had been warned in time and left his window open.。

Ahead of the Champions League group encounter against Benfica this Tuesday evening, the Bavarian spearhead took the opportunity and kicked the ball inside.。

The former striker Salihamidzic turned into a goalkeeper catching the ball before it damaged his beloved coffee machine.。

The 33-year-old's spectacular goal might have remembered the manager of the importance of the Pole for the 2020 treble winner: That it might be time to talk about an extension of his in 2023 expiring contract ahead of his 100th Champions League game for Bayern.。

Not only has former chairman Karl-Heinz Rummenigge demanded to speed up considering rumors the attacker might head for new shores for the final years of his career, but media reports also talk of the interest of Manchester City and Paris St. Germain.。

"I guess Bayern is aware of the value he has for Bayern," Rummenigge said calling the Pole "the benchmark of strikers." The 66-year-old former striker recommended offering a new contract and ending discussions to possibly join the overheated race for Dortmund striker Erling Haaland.。

"There is no one better than him. Not even Cristiano Ronaldo," Rummenigge said. The former German international said Lewandowski can continue for some more years on the highest level.。

The former official's conclusion: Bayern can't afford Haaland. And the club shouldn't change its one-striker system. Lewandowski and Haaland is no sense making this option in his opinion.。

Rummenigge is convinced Bayern should skip his principle to only offer one-year contracts for over 30-year-old and provide two years in this case.。

Media reports lately spoke of Lewandowski being annoyed by rumors speaking of Bayern thinking about a Haaland transfer.。

Statistics speak of the striker having delivered at least one goal in each of his games for Bayern since he joined the club in 2014.。

When crushing Union Berlin in the league 5-2 last weekend, the Pole scored his goals eleven and twelve after ten rounds of matches.。

It seems common sense: Without his goals, Bayern can hardly realize its goal to win this season's Champions League campaign. The Pole has scored 78.。

Julian Nagelsmann said his striker deserves this season's Ballon d'Or award. "He has been unbelievably consistent over the past years; like no one else," Bayern's coach said.。

He admitted, he doesn't like to speak about his job. "I rather think about training and finding new ways of how to score goals and win games. I am a very grounded person." Enditem。